We established the Lady Joan Reid Children’s Author in Residence at Benjamin Franklin House in 2018 to honour the memory of Lady Joan Reid, the House’s historian who served for nearly 15 years as a member of the Houses’ Board.

The inaugural Lady Joan Reid Children’s Author in Residence at Benjamin Franklin House is Professor Sarah B. Pomeroy, a distinguished Professor of Classics and History and author of many publications on Greek and Roman women. She is the accomplished author of numerous books, articles, and reviews on the topic of Women in Antiquity, including the classic Goddesses, Whores, Wives, and Slaves: Women in Classical Antiquity. She has won many awards, including the Ford Foundation Fellowship, Guggenheim Fellowship, the National Endowment for the Humanities Fellowship, and a Mellon Foundation Fellowship. Her pioneering work has been instrumental in our understanding of women in the ancient world.

Professor Pomeroy’s book as Lady Joan Reid Children’s Author in Residence, entitled Benjamin Franklin, Swimmer, will be published by the American Philosophical Society Press in 2021. It is the first book to look at the importance of swimming to Franklin’s important, long and decorated life.  Professor Pomeroy has kindly shared this exciting excerpt. You can also listen to an interview on the subject with our Founding Director, Dr Marcia Balisciano here. 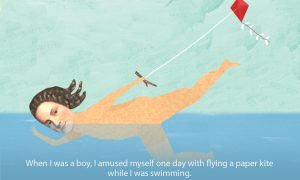 Benjamin Franklin’s earliest unique memories and first inventions are connected to swimming.  In his Autobiography after a traditional opening reviewing his family’s history, his formal education, and his brief apprenticeship as a candlemaker, he wrote a long paragraph about his interest in the sea, and in boats and swimming.  Franklin’s youthful inventions were swimming paddles and a method of kite surfing;  he boasted of them later in life.  Yet this aspect of Franklin’s biography has never been studied.

There are countless publications about Benjamin Franklin:  some of these mention his swimming briefly in passing.   This book is the first study that focuses on Franklin as a swimmer.  The modern reader, especially the sedentary scholar, may be surprised at my choice of subject, considering this American icon’s swimming of little importance when compared to his scientific discoveries and civic and political achievements.  Franklin himself, however, thought swimming was of major importance. He swam wherever and whenever he could, from boyhood through old age and he chose to live close to rivers where swimming was possible.

Franklin’s personality emerges through the lens of swimming.  We see him clearly as a leader, an inventor, and a strong, proud man. As he was in many fields, he was self-taught.  He interacted with family, friends, and acquaintances through swimming.  When he was a young man in London, swimming offered him an entrée into British society.  It is possible to trace Franklin’s travels by noticing the places where he swam.

Franklin discusses swimming in his Letters and in his Autobiography. Friends and family also comment on his swimming.   Though the evidence is sparse, varied references to swimming occur throughout Franklin’s lifetime and in a variety of contexts.  He praises swimming because it promotes health, hygiene, and safety especially when people find themselves suddenly in the water.  Therefore knowing how to swim was essential not only for a professional sailor but also for anyone who travelled by boat.  In those days travel by boat was common. In his Autobiography Franklin mentions taking boats and ferries in his first journey from Boston to Philadelphia and of course in his subsequent journeys:  he records the perils and pleasures of these voyages in detail.  Drownings were such a common occurrence that only multiple disasters destroying entire families or boatloads attracted much attention.  The water played a decisive role in Franklin’s life. Fearing ocean travel, Franklin’s wife Deborah refused to join him in Europe and they spent most of their married life apart.

When Franklin’s grandson Benjamin Franklin Bache was in his care in France he allowed him to swim across the Seine, an activity that was fraught with danger from strong winds and passing ships.  Benny’s Journal constitutes another important primary source for this book.  The escapades of this engaging literate teenager in France with a benevolent indulgent chaperone have never before been published.  Benny is an astute and likeable guide to the 18th century.  There is no doubt that the Journal of Ben Franklin’s grandson will be of great interest both to sophisticated younger readers and to scholars and amateurs of Ben Franklin.

A LIFETIME OF SWIMMING

Franklin was in good health due to diet and exercise.  He was proud of his physique (which can be attributed to swimming).  Being nude did not embarrass him at all, and he continued to swim even when he was eighty years old.  Swimming in cold water was fashionable in the 17th and 18th centuries, but as usual Franklin  was an independent thinker:  in his fifties he preferred to take “air baths” naked in front of the window at his lodging on Craven Street, London.

On his first trip to London, Franklin lived in Little Britain and then moved to Duke Street (now known as Sardinia Street).   Returning later as an affluent gentleman from 1757 to 1775 he rented the parlor floor in the building now preserved as “Benjamin Franklin House” at 36 Craven Street.  He would have taken his airbaths in front of the large windows.  His lodging on Craven Street (1757-1775) was a very short walk to the Thames.  Proximity to the river probably influenced Franklin’s decision to choose this location.

@Copyright Sarah B. Pomeroy. 2018. Do not reproduce without permission of the author.