On Friday, 28 February 2020, 32 students from six schools across the UK joined us for Frankly Speaking, the annual Benjamin Franklin House debate competition in collaboration with the US Embassy London and The Daughters of the American Revolution (Walter Hines Page Chapter). Bloomberg also generously supported the event, with members of their London team volunteering as judges and invigilators on the day. Teams traveled from Coventry, Portsmouth and London to take part. The heats and semi-finals were held at Benjamin Franklin House, while the finals took place at the US Embassy London. 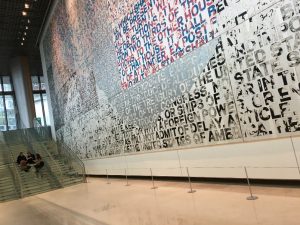 Students were challenged to address questions relating to the environment, education, penal reform, internet safety and freedom of speech. Judges were impressed by the students’ level of preparation as well as their confidence and powers of persuasion. 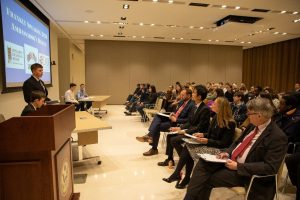 The winning in the junior category, Years 10&11, was Whitley Academy, represented by Duncan Van Den Top and Ciaran Wyllie (Ciaran was also the individual runner-up for this category). Daniel Fourman from Southbank International School won the individual prize for this category: a tour of the Houses of Parliament with the Rt Hon. Baroness Anelay of St Johns DBE – made possible with support from the DAR. 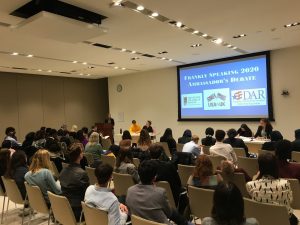 The winning team in the senior category, Years 12&13, was Saint Cecelia’s Church of England School, represented by Benjamin Sturley and Agnes Moon. The individual runner-up for this category was Isabelle Lewitt from Southbank International School in Westminster. Agnes was awarded the individual prize and will be put forward as the US Embassy London’s nomination for the Benjamin Franklin Transatlantic Fellows Summer Institute at Purdue University, Indiana. Postponed to 2021, Agnes will be joining students from across the US and Europe to explore American culture and politics and discuss opportunities to improve civil society.

All participants will be invited to a reception at Benjamin Franklin House. Many thanks to the US Embassy, the DAR (Walter Hines Page Chapter) and Bloomberg for their support.