Join us for an afternoon of festive cheer with beautiful gifts and mulled wine at the world’s only surviving Franklin home. 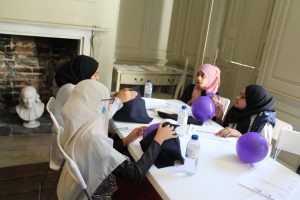 Join our Saturday science club to learn all about the experiments carried out by Benjamin Franklin and his British friends as well as trying your hand at practical investigations. Each session will cover a different topic from the Key Stage 3 science curriculum including electricity, forces, photosynthesis and the human body.

See below for more details of our upcoming sessions:

Free to attend but booking is essential.

Delivering the 2019 Robert H Smith Lecture in Democracy, Irina Bokova, former Director-General of UNESCO, explores how issues of education for all, gender equality, tolerance and the fight against violent extremism are crucially linked to the preservation of heritage.

Irina Bokova is a Bulgarian politician and former Director-General of UNESCO (2009 to 2017). She was the first woman and the first Eastern European to lead the organisation. During her political and diplomatic career in Bulgaria, she was twice elected as a Member of the National Parliament and served in the Ministry of Foreign Affairs. She also served as Bulgaria’s Ambassador to France and to Monaco, and was Bulgaria’s Permanent Delegate to UNESCO. At UNESCO, Director-General Bokova advocated for gender equality, improved education and preventing funding for terrorism, especially by enforcing the protection of intellectual goods. She was particularly active in defence of cultural heritage in conflict in Mali, Syria and Iraq and in denouncing extremists’ destruction of heritage as a tool of war.

Sponsored by the Eccles Centre for American Studies at the British Library in collaboration with Benjamin Franklin House.

For more information and to purchase tickets please follow the link here.

As part of the Emerge Festival, a celebration of London-wide culture, we will offer evening views of the House, along with a demonstration of Franklin’s glass armonica.

Join us on a whistle-stop tour of Franklin’s many ingenious inventions, from the lightening rod to the glass armonica and the Franklin stove. House Education Manager, Eleanor Hamblen, will reflect on how Franklin’s scientific process led him to become one of the key figures of the Enlightenment and how his discoveries have shaped our modern world.

Join us to learn how children passed their time 300 years ago with Georgian toys and games. Design and create some your own traditional toys to take away.

Children will discover the magic of the holiday – 18th century style. Sing along to festive classics like Jingle Bells with accompaniment on the glass armonica, the instrument Franklin invented at Craven Street. Enjoy holiday treats and deck the halls with Christmas crafts to make and take home!

Explore the darker side of the 18th century pursuit of knowledge with the team at Benjamin Franklin House. As you make your way through our Grade I, Georgian building, you’ll discover why over 1200 bones were unearthed in the basement. Drink included.

Step back in time and experience the House in true eighteenth-century style this winter with our festive candlelit tours. Mulled wine and mince pies in Franklin’s parlour before exploring the House and its unique history.