Home / News / Article / Deep sadness at the loss of Michelle Smith, President of the Robert H.... 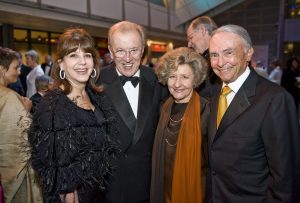 All of us at Benjamin Franklin House are deeply saddened by the untimely death of Michelle Smith, President of the Robert H. Smith Foundation.

Michelle greatly strengthened Benjamin Franklin House over many years through her strategic advice and support.  She helped us realise offerings that have enriched people’s understanding of Franklin’s life and times including our Virtual Georgian Interior, expansion of our Sister Schools programme, and the creation of Franklin’s Young Inventors science initiative.  Michelle understood the power of history to enlighten our past and enrich our future.

She carried on the legacy of her father, the late Robert H. Smith, for whom our Scholarship Centre is named.  In her honour and that of her father, we are renaming our annual lecture on America and democracy, the Robert H. Smith Family Foundation Lecture in American Democracy, which will take place next on 13 October 2020 in conjunction with the London School of Economics.

Michelle, with a distinguished background in design and property development, was a leader in philanthropy and civic engagement.  Her passions included heritage, the arts, and the world of ideas.  She served on The Aspen Institute Board of Trustees, Clarice Smith Performing Arts Center Leadership Council, Foundation for Art and Preservation in Embassies Board of Directors, Kennedy Center International Committee, Mayo Clinic Leadership Council, National Gallery of Art Trustees Council, University of Maryland College Park Foundation Board of Trustees, Hebrew University Board of Governors, Board of Trustees of the Thomas Jefferson Foundation that owns and operates Monticello, New-York Historical Society Board of Trustees, the Whitney Museum of Art National Committee, The Better Angels Society Board of Directors, and the Smithsonian American Art Museum Board of Commissioners.

We will greatly miss but always remember Michelle’s intelligence and grace, insight, and generosity.